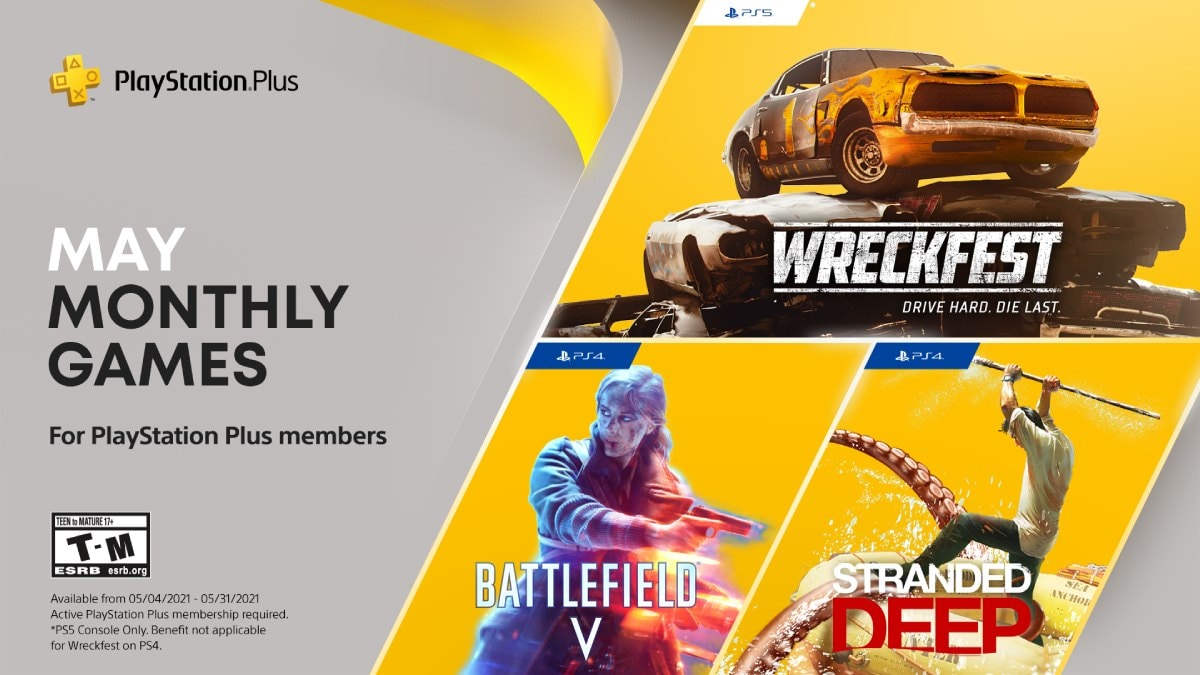 PlayStation Plus subscribers will get their hands on an World War II epic, a challenging survival adventure, and a high-on-adrenaline racing title as part of their free games lineup for the coming month. Battlefield V, Stranded Deep, and Wreckfest will be available free to all users with an active PS Plus subscription. While the first two titles will be available for all both PS4 and PS5 users, Wreckfest is a PS5 exclusive. Subscribers will have until May 3 to scoop up the free games from the April lineup — Days Gone, Zombie Army 4: Dead War, and Oddworld: Soulstorm.

Known for its massive multiplayer modes such as Grand Operations and Combined Arms, the World War II shooter from EA DICE is marked by jaw-dropping visuals and tight gameplay. For single player afficionados, Battlefield V offers a memorable experience via its War Stories campaign, where you get to experience the emotional stories of different soldiers as they face the horrors of war. With Battlefield 6 set to release towards the end of this year, Battlefield V could offer a great chance for players to brush up on their multiplayer skills.

Did you like the TV thriller Lost? If yes, you may get addicted to this survival adventure from Australian studio Beam Team Games. You play as a plane crash survivor who finds himself stranded alone on an island in the middle of the Pacific Ocean. You need to rely on your scavenging and crafting skills to survive in this surprisingly challenging title. The world you explore is procedurally generated. So, no two playthroughs will ever be the same. Oh, did we mention there’s also a giant squid lurking in the ocean waters? Tread carefully, survivor!

A racing title that could make even Fast and Furious’ Dominic Toretto weak in the knees, Wreckfest delivers exactly what the name promises. A spiritual successor to the FlatOut series, Wreckfest lets you drive stock cars in breakneck speeds across a wide variety of tracks in destruction derby style. If crashing cars seem too mainstream, you can always fire up the incredible Sofa Car in Couch Craze events. Check out this fun gameplay video posted by KingGobbo on YouTube to see what we’re talking about.

Earlier this month, as part of the Play at Home 2021 initiative, Horizon Zero Dawn Complete Edition is made available for free for all users. The initiative also bring several more free games for users. Click here to check out the available titles.

What do you think of this month’s free PS Plus games? Let us know on our dedicated Gaming Community forum where you can connect with fellow gamers, seek tips and guides, or simply rant about any irksome game or feature you came across.

PS5 vs Xbox Series X: Which is the best “next-gen” console in India? We discussed this on Orbital, the Gadgets 360 podcast. Orbital is available on Apple Podcasts, Google Podcasts, Spotify, and wherever you get your podcasts.

Snapchat Plus Paid Subscription Service Launched, Now Available in US at $3.99 per Month
Solana Unveils Web3 Mobile Phone
One of the most prominent crypto hedge funds just defaulted on a $670 million loan
Tesla is cutting about 200 Autopilot jobs and closing office in San Mateo, California
Micron Forecasts Q4 Earnings Below Expectations, Raises Concern About Chip Down Cycle