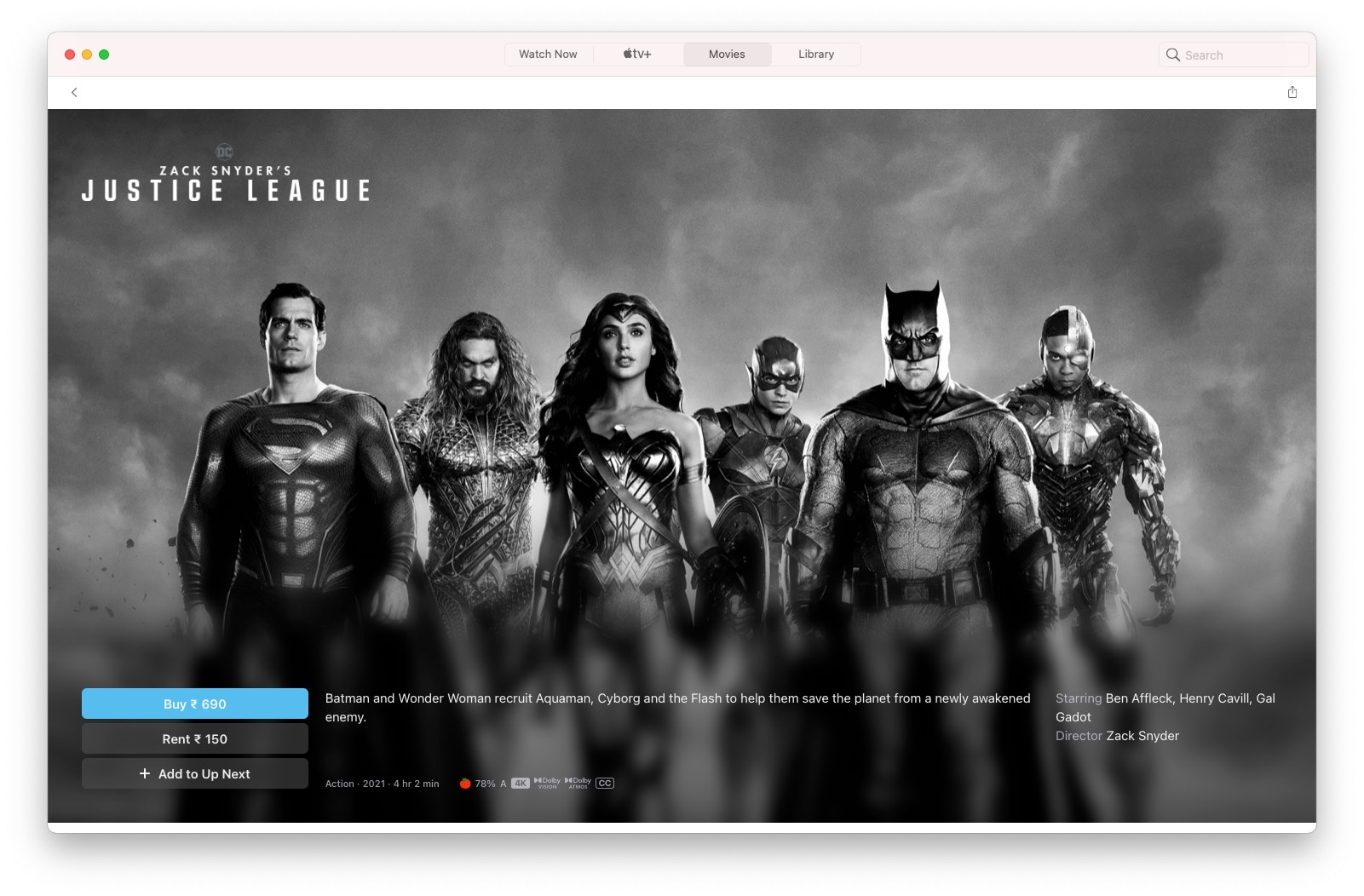 Justice League Snyder Cut is out now on Apple TV in India — making this the best way to watch the highly-anticipated DC superhero movie. Apple TV (formerly iTunes Movies) is offering Zack Snyder’s Justice League in 4K resolution and with support for both Dolby Vision HDR and Dolby Atmos 3D sound. You can choose to rent Justice League Snyder Cut for Rs. 150 on Apple TV, or own it forever for Rs. 690. Apple offers 4K and HD at the same price so you don’t have to worry about paying more for the best version. Moreover, Zack Snyder’s Justice League costs the same as it does elsewhere, and Apple has been in the video-on-demand business much longer than its counterparts.

BookMyShow Stream, Hungama Play, and Tata Sky were the first to go live with Justice League Snyder Cut around release time (12:31pm IST), while Apple TV was still stuck at the “pre-order” phase for another two hours. But if you’ve a 4K TV with all the Dolby bells and whistles, the wait is worth it. Zack Snyder’s Justice League is limited to HD video quality and Dolby Digital 5.1 surround sound on all of BookMyShow, Hungama, and Tata Sky. Meanwhile, Apple TV is on par with HBO Max — the US-exclusive home for the DC movie — and as Zack Snyder intends it to be seen. Of course, if quality is paramount, you might want to wait a little more, for the Justice League Snyder Cut 4K Blu-ray.

Unfortunately, Apple doesn’t make it easy to maximise your movie experience. To watch Zack Snyder’s Justice League in 4K with Dolby Vision and Dolby Atmos, you’ll need a select few devices: an Apple TV 4K, Amazon Fire TV Stick 4K, or a compatible Mac. Select iPhone and iPad models also support Dolby Vision, but they do not go up to 4K resolution. And though Xbox One S/X and Xbox Series S/X support Dolby Vision, the Apple TV app available there does not. You will get Atmos audio however. This is also true for major smart TVs from LG, Sony, and Vizio — no Dolby Vision in Apple TV, only Atmos.

Zack Snyder’s Justice League is out now on Apple TV, BookMyShow Stream, Hungama Play, and Tata Sky in India. It’s also available on HBO Max in the US, HBO Go in parts of Asia, and HBO services in Central Europe, the Nordics, Portugal, and Spain. In all other markets, it’s available on a range of video-on-demand platforms.