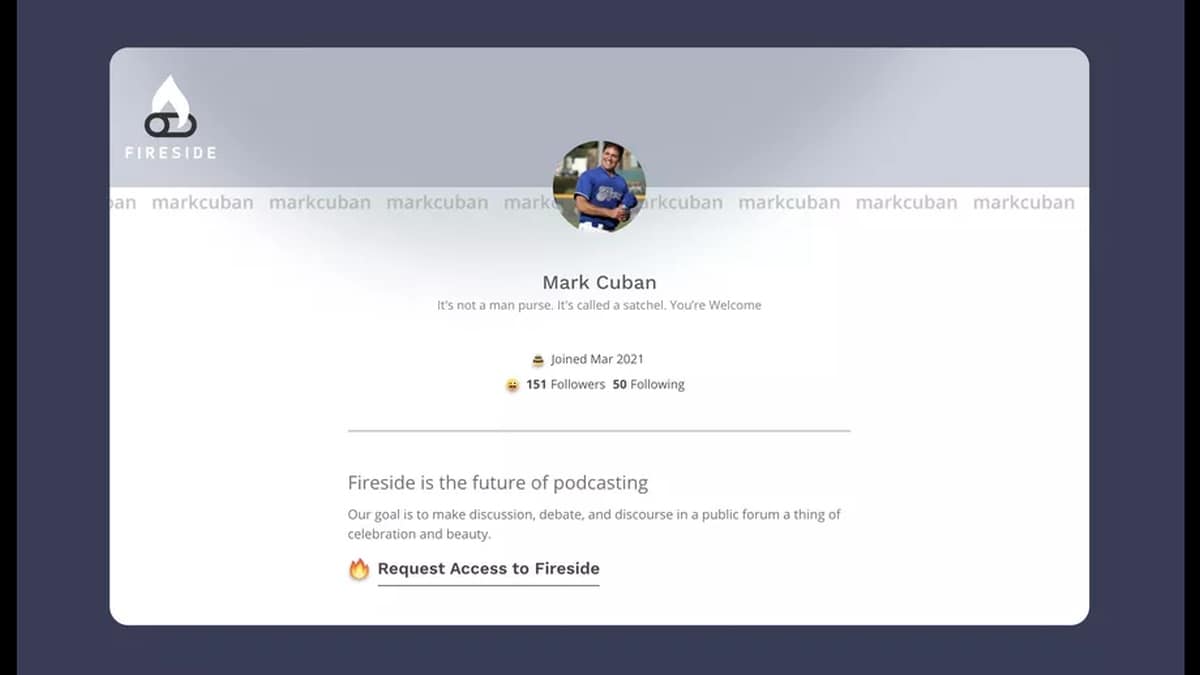 Fireside, an under-development audio app said to be a hybrid between audio chat app Clubhouse and Spotify’s Anchor podcast platform, has reportedly surfaced in screenshots. Co-founded by serial entrepreneur Mark Cuban and Founder and CEO of Node.ai Falon Fatemi, it is said to be currently under beta testing on iOS. The report says that while the app only has a few testers right now, their chats are available to even non-users through a browser. The screenshots of the beta app as well as of its desktop view give a sense of how Fireside will look and function.

As shared in a report by The Verge, a screenshot of Cuban’s profile on Fireside shows his profile picture above a one-line bio. The bottom half of the page carries an introduction of the app under the title “Fireside is the future of podcasting”. “Our goal is to make discussion, debate, and discourse in a public forum a thing of celebration and beauty,” it says. The report says that Fireside makes live conversations — a USP of Clubhouse — a priority and is trying to make impromptu conversations sound more professional by adding things like intro music that welcomes users into a room.

More screenshots in the report show Fireside user-profiles carrying the follower/ following count, the rooms they have hosted, and the rooms they have participated in, along with the usual profile picture, bio, and the app joining date. The screenshots also show an abundant use of emoji. The report elaborates that users looking at someone’s profile can also tap on a room to listen to an old chat as Fireside natively records conversations. Clicking on the play button is said to introduce the user to the room with intro music as mentioned earlier, which is followed by the recorded conversation. The description of the conversation appears below the play icon along with the number of people who have listened to it.

Other actions while listing to a chat on Fireside include a jump button to skip to the highlighted parts of the conversations chosen by the host. A speaker with a crown icon next to their name is the host and speakers with gavel icons are moderators, according to the report. Moderators get the ability to welcome participants to the “stage” to speak and also mute anyone in the room.

The report points out that tuning in to a live chat on Fireside seems less elaborate. Listeners joining in can only see icons and names and the number of people tuned into the conversation. Participants with their microphones on can be identified by fully opaque profile pictures and those on mute with transparent profile pictures. Listeners can also react to conversations with comments, emoji, and sound effects such as a clap. And those who would like to join the live chat can do so by tapping a microphone emoji and submitting a written request.

The Verge in an earlier report about Fireside app being under development claimed that the app could launch in 2021, citing a source close to the development. It also says that creators will have many ways to monetise the conversations and that the app won’t allow just anyone to speak publicly. A job posting from Fireside mentioned in the report said that Fireside has raised a “multi-million dollar” seed round.

Grayscale refuses to share proof of reserves due to ‘security concerns’ as shares trade at a 45% discount to bitcoin
A judge is allowing FTX to hide the identity of its 50 biggest creditors. #shorts
iPhone 14 Series OLED Displays Were Largely Supplied by Samsung: Report
Disney’s New CEO May Have to Cut Costs to Restore Profits as Streaming Loses Money
ISRO’s RH200 Sounding Rocket Registers 200th Consecutive Successful Launch